Not local or want to stay home? We offer online solutions! Book Now.

Not local or want to stay home? We offer online solutions! Book Now.

5 Reasons You Should Resistance Train

If all of the benefits of muscle strengthening through resistance training were packed into a pill - there would be a line out the door for people to buy it. However, there are no monetary vested interests or massive profits to be had on the scale of pharmaceuticals or charging insurances to treat illness to pump awareness. 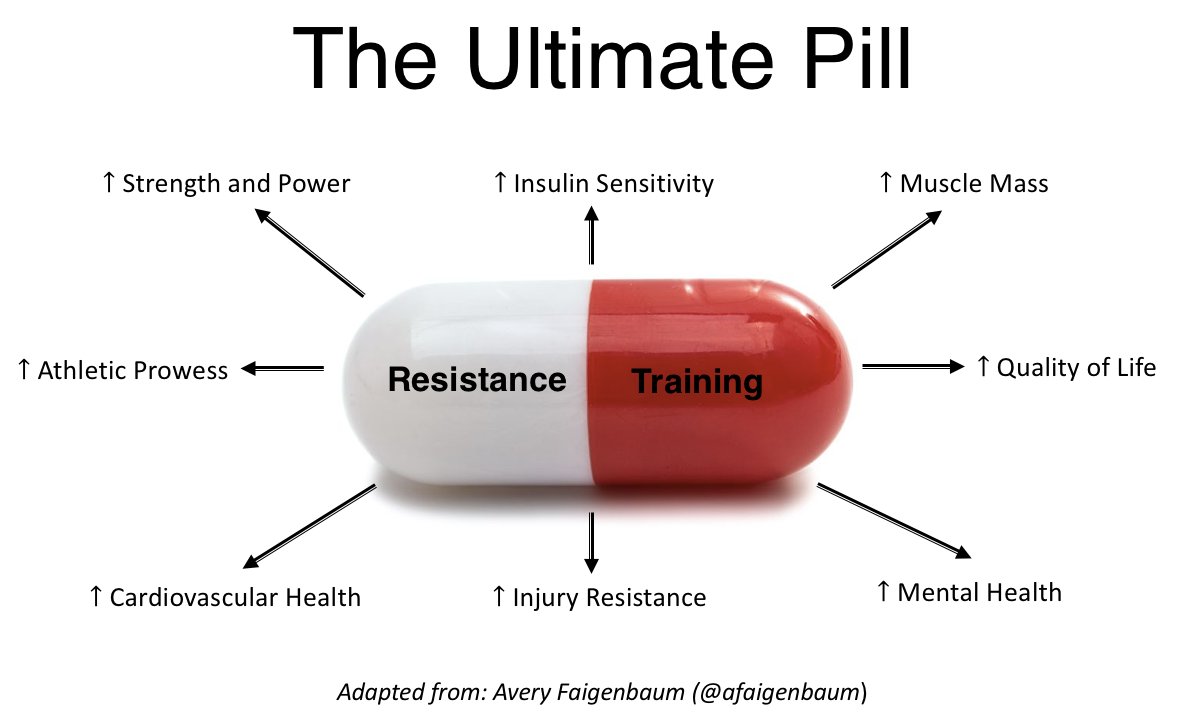 5 Reasons You Should Resistance Train

If all of the benefits of muscle strengthening through resistance training were packed into a pill - there would be a line out the door for people to buy it. However, there are no monetary vested interests or massive profits to be had on the scale of pharmaceuticals or charging insurances to treat illness to pump awareness.

For the vast majority of people, resistance training has gone overlooked. When analyzing nearly 480,000 adults in the United States a whopping 4.5% of them met the guideline of resistance training twice a week. These physical activity guidelines are provided by the World Health Organization and we covered them more here if you’d like to know if you are one of the few that meets the criteria. 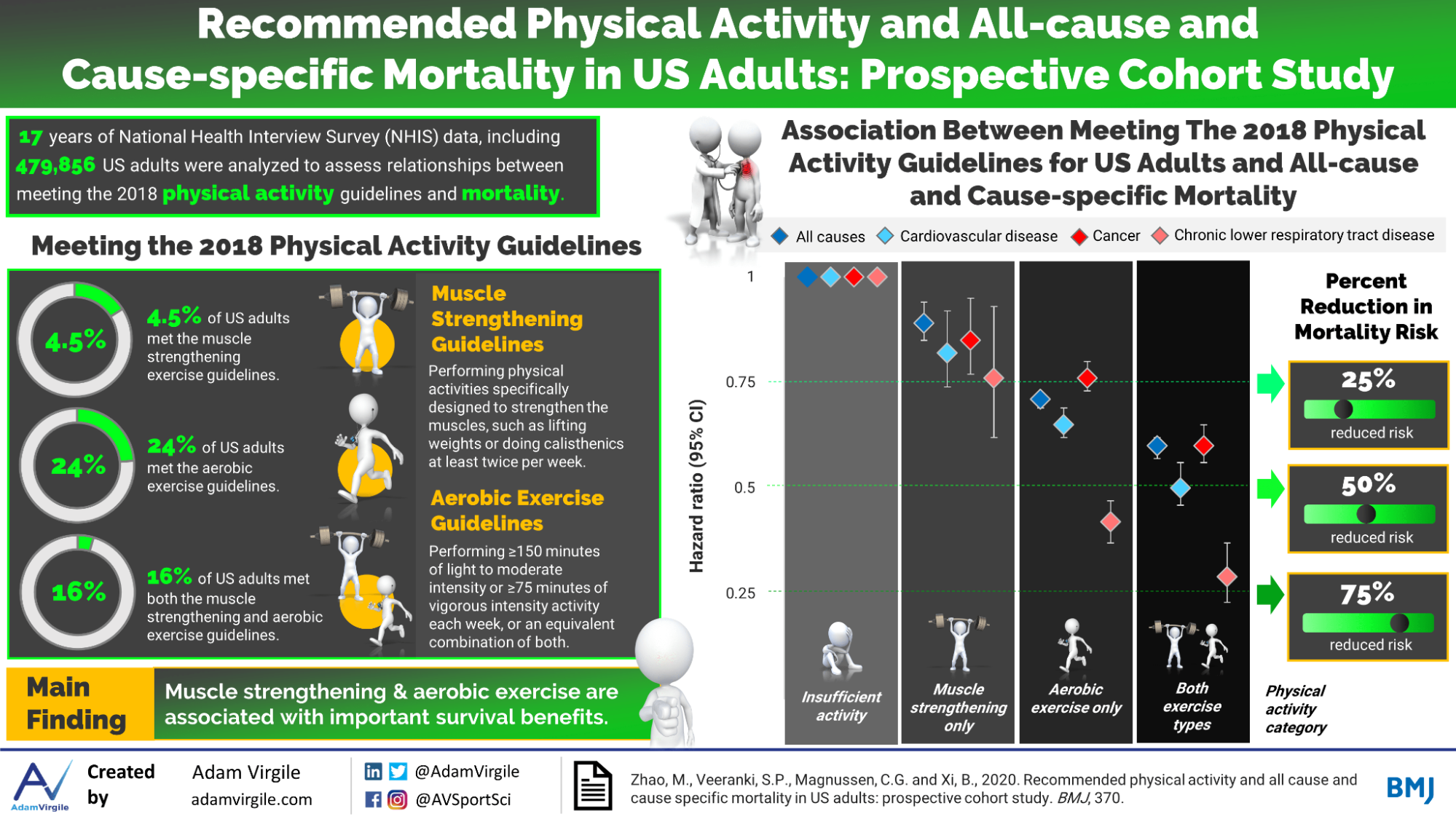 This is an abysmal stat given the known benefits that are seen with resistance training. If you pair it with regular aerobic exercise, you are in rare company and will set yourself up to live longer with less physical limitations.

The pluses are well established, so let’s talk about them.

Remember that study I mentioned of like a half a million people? Yeah, they showed that when you pair resistance training with aerobic exercise, you are basically giving your body the tools to give the stiff arm to dying early from chronic illnesses (cardiovascular disease, cancer, chronic lower respiratory tract disease). Though it's not 100% guaranteed, the numbers reveal anywhere from 50%-75% reduced risk of dying from these conditions. I don’t know about you, but I am taking those odds all day everyday. 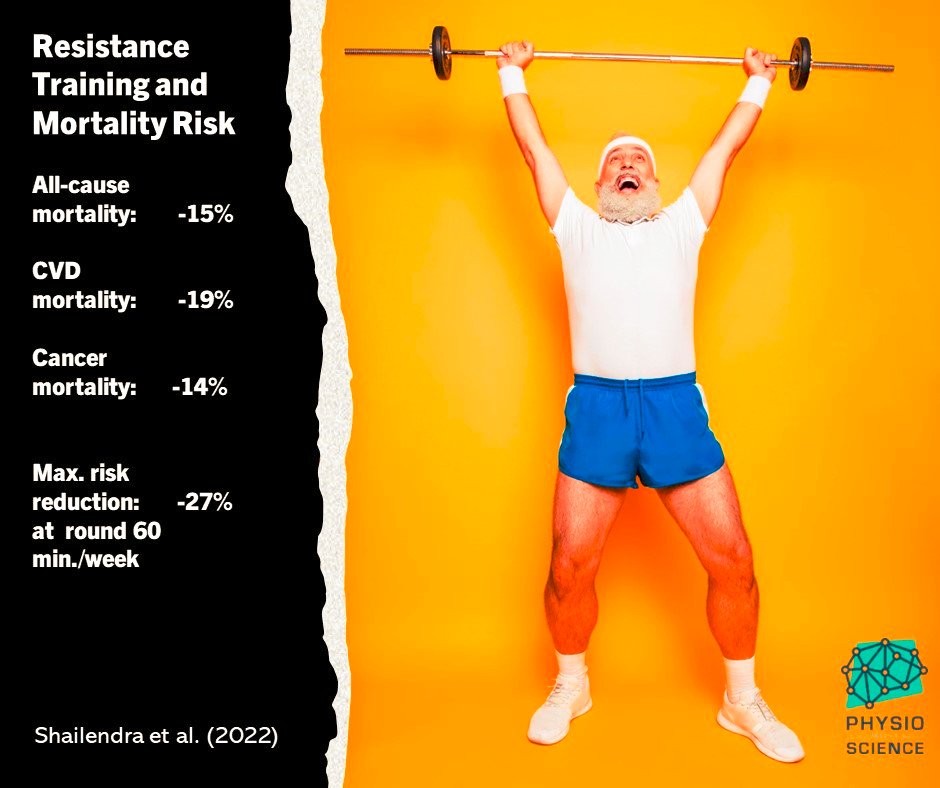 The benefits for resistance training on other specific chronic illnesses have also been studied. Here is a great list of the positive effects listed by illness. 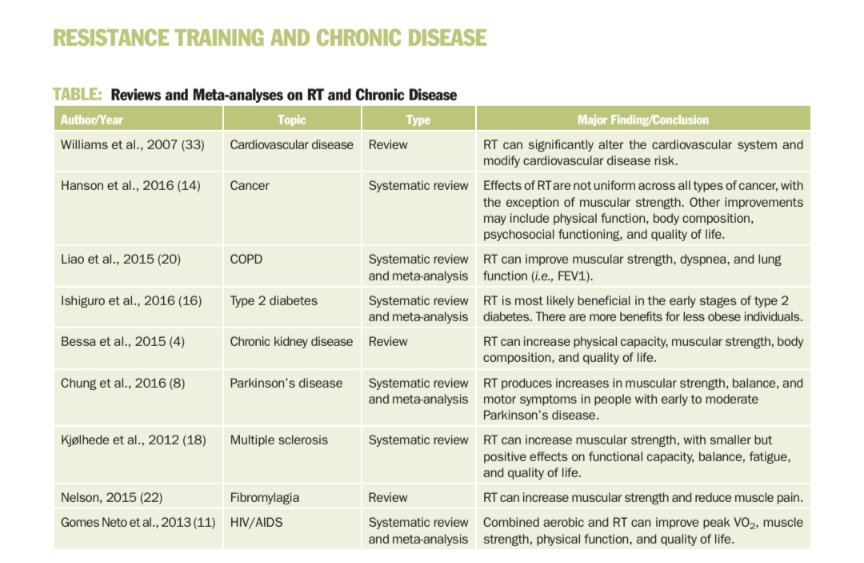 We tend to forget the important role that muscle plays when regulating our sugar and sugar storage. When you eat carbohydrates, your muscle tissue should store those carbs as glycogen. The two major storage depots for glycogen are your skeletal muscle and your liver. 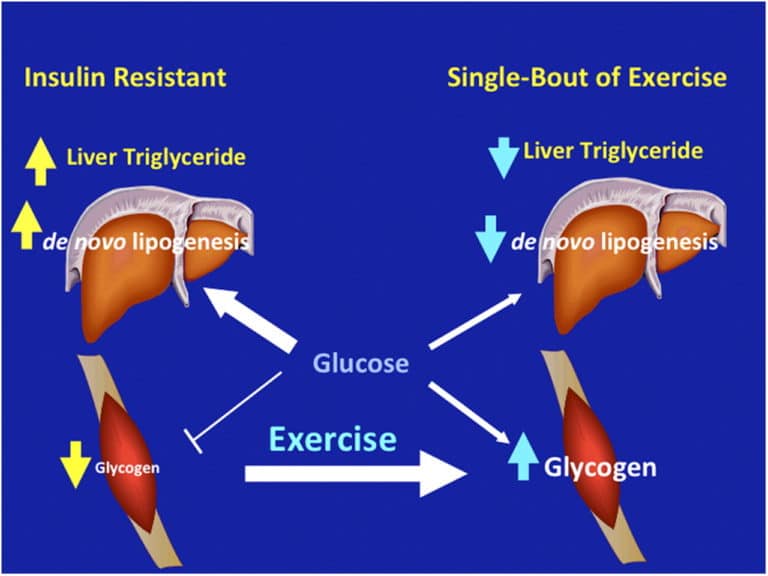 When there is a lack of exercise compounded with a diet steady with surplus calories disorders like insulin resistance (learn more here) can start forcing more storage to the liver which in the long run causes some serious problems (fatty liver, etc). If this metabolic conundrum begins with someone in their 20’s imagine how the development goes once they are in their 40’s. Chronic illness take time and often don’t have associated symptoms until it is MUCH harder to reverse/treat. This is why they are often referred to as “silent killers”.

This is why regular stress on the muscular system in the form of resistance exercise (and even better with aerobic exercise) early and often can literally save your life. The investment in your health is far more valuable than any other you have made - and just like any other investment the best time to start was yesterday and the second best time is now. 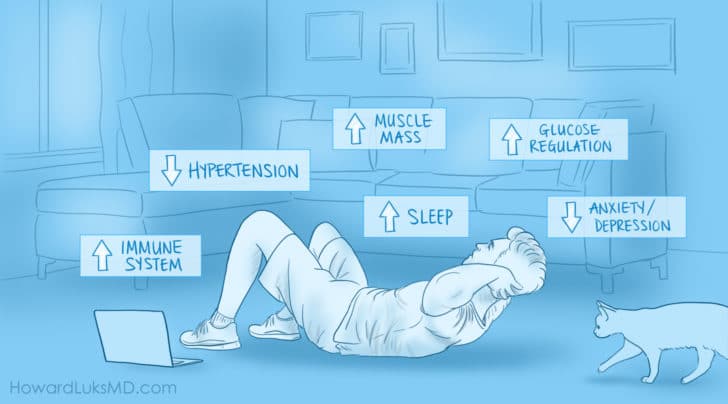 Resistance Training is the True Fountain of Youth 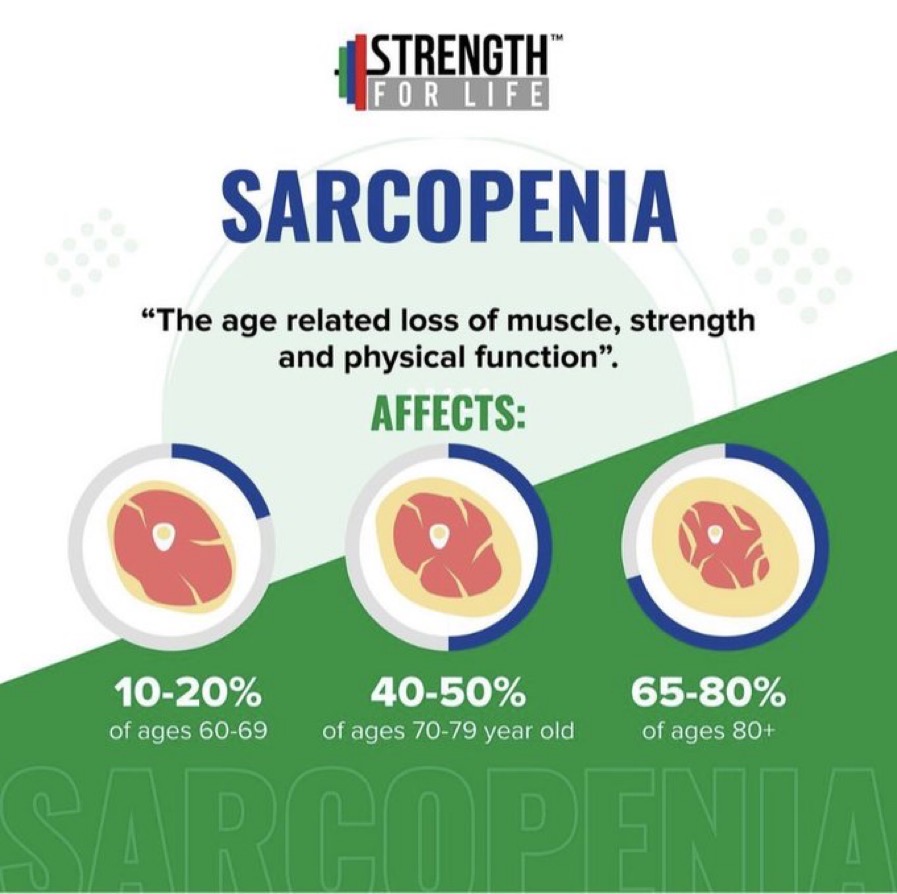 At the age of 40 muscle wasting (sarcopenia) becomes measurable and each decade after it increases. However, we know that in even just 12 weeks of resistance training the effects of sarcopenia can be REVERSED. 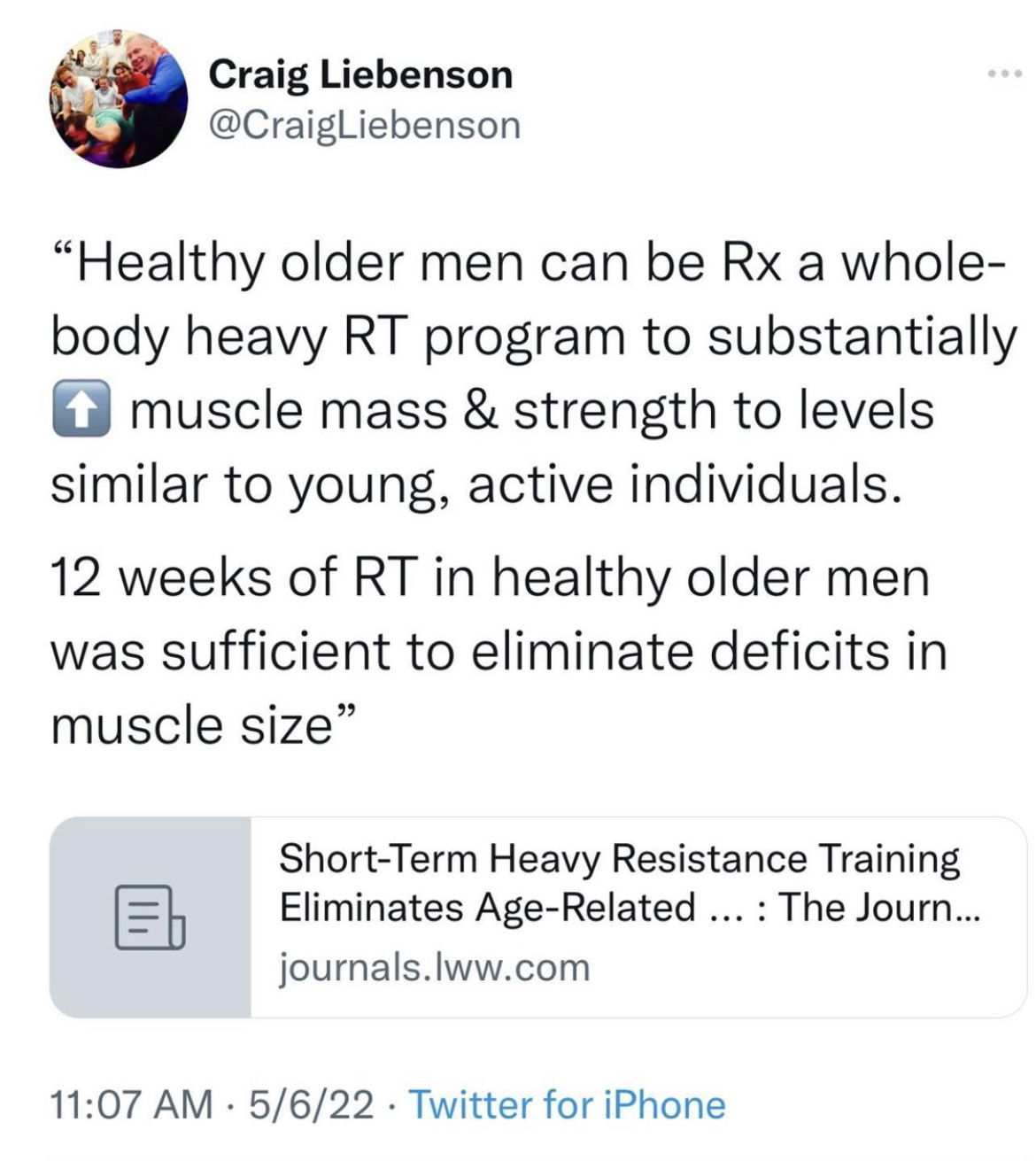 This is literally anti-aging. Muscles adapt very well to stress, and it doesn’t seem to matter how old you are. In fact, resistance training may the MOST important for the aging population and could be one of the largest factor to being physically independent for as long as possible when aging.

This is very interesting given most people would be scared to have someone in their 70’s lift weights. However, this is incredibly important to stave off sarcopenia and build stronger bones. Outside of the structural benefits of stronger muscles and bones, lifting heavier objects comes with an increase in coordination and confidence.

This can act like a positive loop where this newfound strength and confidence will push one to get more out of their body doing daily tasks or maybe trying new things with their loved one to provide more value to their lives. The goal is to stay as young as possible for as long as possible. One way to blow out less candles than last year is to add resistance training into your routine if you do not have it in there.

Take some time to read through the table below. Many athletes, young and old, never get the most out of their performance because they lack sound resistance training. Outside of elite professional athletes - many don’t lift weights. Remember less than 5% of adults lift weights twice a week.

Sports and recreational activities are all about managing forces that are placed upon you efficiently as possible. Some activities like distance running require more efficiency than absolute forces while others like field/court sports require a blend of both.

I would argue that many who play recreational sports do not focus enough on the ability to produce and absorb absolute strength. For example when running we know that we absorb 5-8x our body weight each step we take. Now imagine how much more force is required to cut or change direction like in a field/court sport.

The muscles must be strong enough to handle these forces. Resistance training can prepare your body to withstand these forces to reduce the risks of injury and increase your ability on the field/court. 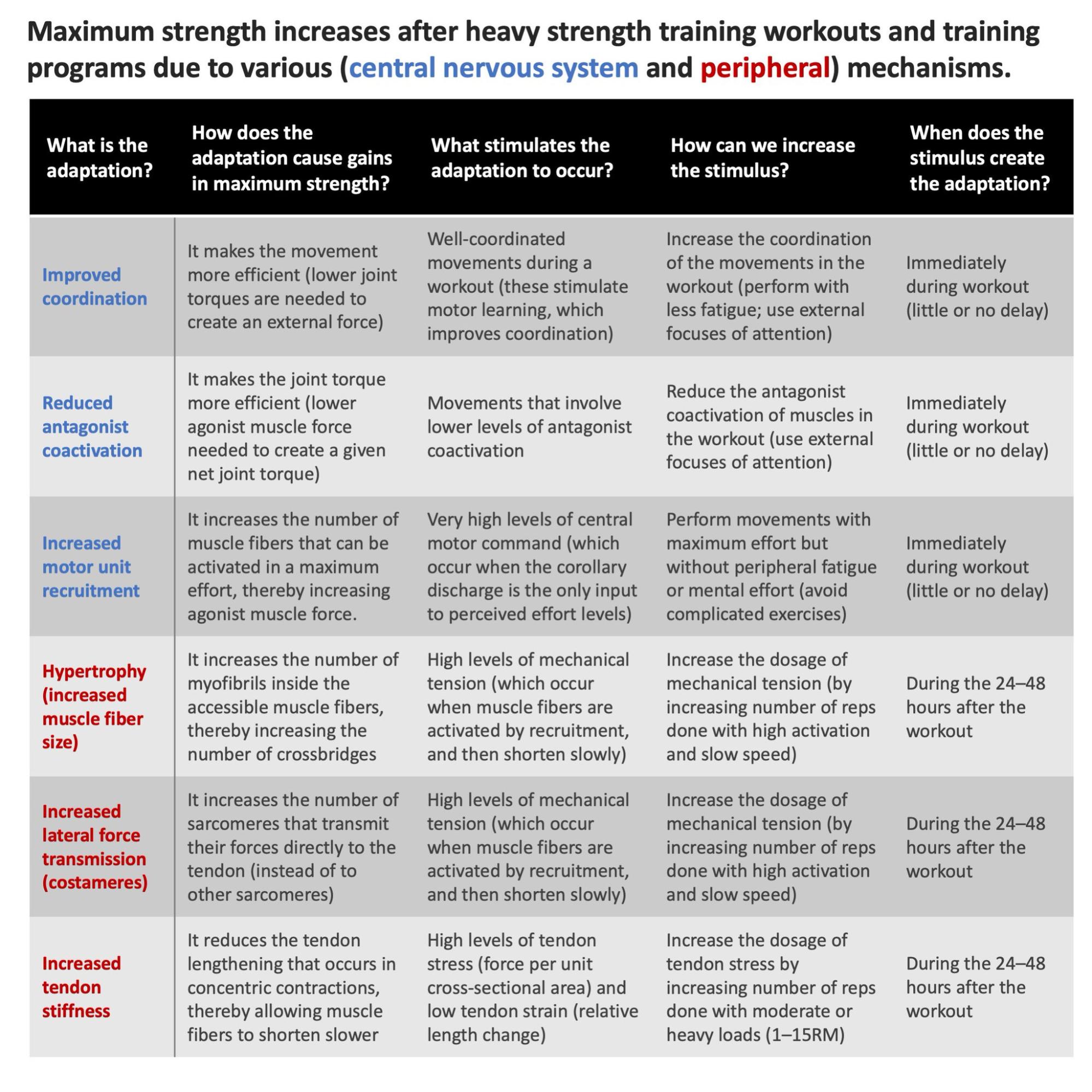 Confidence is the cornerstone of performance. Athletes like Dieon Sanders embodies this. Resistance training has shown to help with depression and anxiety as well as sleep disorders. 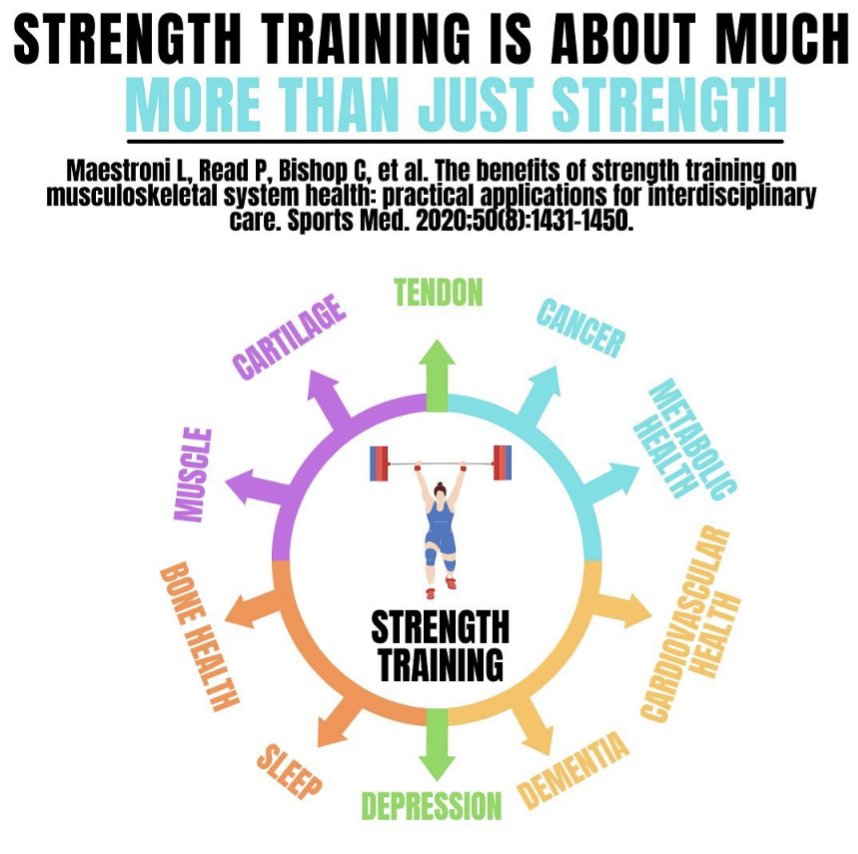 It makes a lot of sense when you think about it. Resistance training is all about overcoming a a physically challenging weight and slowly becoming stronger and more efficient at lifting the given weight. It is about making the hard easy.

Outside of the feel good hormones that are released secondary to exercise, becoming stronger gives one more confidence in their body. In my experience, this inherently bleeds into their everyday life. There are much less things they are unable to do socially when friends ask to hang out.

For example, physical activities one may do in a social setting like dancing, hiking, playing recreational sport all become less intimidating after you have challenged your body physically and find out how strong you really can be.

So it is not all about just getting strong when it comes to resistance training. It is much more than that. Not dying, staying young for as long as possible, performing at higher levels, avoiding metabolic illnesses, and being more confident all sound pretty awesome to me. What do you think?

In a previous blog Why Do Muscles Feel Tight, we talked about why your muscles get tight. Now we have a sense of what may be ...

What to Expect from a Visit to Kinetic Impact

What You Can Expect... At Kinetic Impact our focus is on keeping our clients active and pain free. Our holistic approach comb...

Why Do My Muscles Feel Tight All the Time?

The goal here is to shed a little light on what's going on with your tight neck, tight back, tight anything really. This is ...